How many times have you gone to the refrigerator or pantry and pulled out something that was fat-free and sweetened with artificial sweetener only to return a few minutes later still hungry?

One theory bandied about this observed occurrence “is that artificial sweeteners don’t contain the calories or energy that evolution has trained the brain to expect from sweet-tasting foods, so they don’t fool the brain into satisfying hunger. However, until now, nobody understood how organisms distinguish between real sugar and artificial sweetener.” (diet sweeteners could exist in humans, 2015)

Monica Dus, a researcher at the University of Michigan, has discovered how the brain and the fruit fly can tell between the two. “Because that molecular machinery is present in the guts and brains of humans on a larger scale… human brains will differentiate in the same way.” (diet sweeteners could exist in humans, 2015)

“Fruit flies and humans share about 75 percent of the same disease-causing genes, says Dus, first author on a study that outlines the findings and appears in the journal Neuron.” (Bailey, 2015)

“We can ask, ‘Do these genes work the same in humans, to tell real sugar from artificial sweetener?'” Dus said. “The bits and pieces are there, so it is really possible that these genes work in a similar way. Plus, we knew that the human brain could tell the difference between real and fake sugar, we just did not know how.” (Bailey, 2015)

Dus et al. withheld food from the fruit flies for a few hours and then placed before the diet, artificial sweeteners, and real sugar. When the flies ate the real sugar, a group of six neurons signaled the release of a hormone in the gut and brain.

The hormone signaled digestion and allowed the fly to eat more food. When the fly tried the artificial sweetener with no nutritive value, the neurons did not fire and signal the hormone/digestive reaction.

In all cases, the flies ate the regular sugar because the starved flies needed the energy/calories that real sugar supplied. 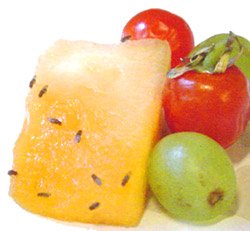 “From an evolutionary perspective, sweet taste means sugar (traditionally from fruit or high concentrate carbohydrates) and a subsequent big energy boost. Fruit flies can’t call out for pizza–their brains expect calories if they eat something sweet, and that’s why they chose the regular sugar, Dus says.” (diet sweeteners could exist in humans, 2015)

“If our brains work the same way, this helps explains why diet foods don’t satiate or satisfy us, and we gain weight while dieting. It’s analogous to a person eating that entire sleeve of low-calorie cookies and the body telling her she’s still hungry. She keeps snacking until she eats something with nutritional value that meets her energy needs.” (Bailey, 2015)

The fruit fly is been shown to have approximately 100,000 neurons; the human brain about 86 billion. The six neurons identified in the study of fruit flies approximate the same spot and humans. This allows the researchers to more easily hone in on location in the human brain. “The neurons fire only when they encounter real sugar” (Bailey, 2015), which offers a way for the brain to tell the difference between sugar and artificial sweeteners.

“In two previous studies, Dus and her colleagues found that flies that couldn’t taste preferred real sugar to a zero-calorie sweetener, which underscores the theory of energy preference. They also characterized a neural circuit, dubbed Cupcake+, which functions as a behavioral on/off switch for eating. Turning off the Cupcake neurons makes the fruit flies “feel” hungry, Dus says.” (Bailey, 2015)

Dear Hail-Fellows well met, “The Fat Bastard Gazette” is written and edited by your favorite curmudgeons Captain Hank Quinlan and

Staff (monkeys in the back room). We offer an ongoing tirade to support or offend anyone of any large dimension, cultural background, religious affiliation, or color of skin. This gazette rails against an eclectic mix of circus ring ne’er do wells, big ring fatty and fatso whiners, congenital idiots, the usual motley assortment of the profoundly dumbfounded, and a favorite of intelligent men everywhere, the

“Great Booboisie.” Nor shall we ignore the wide assortment of shirkers, layabouts, and slugabeds.

All this and more always keeping our major focus on “Why so fat?”  Enough said? We at “The Fat Bastard Gazette” think so. If you like what you read, and you know whom you are, in this yellow blog, tell your friends. We would be elated with an ever-wider readership. We remain cordially yours, Captain Hank Quinlan and the Monkeys in the back room

No similarities to any existing names or characters are expressed or implied. We reserve the right to offend or support anybody, anything, or any sacred totem across the globe.

One thought on “FRUIT FLY NEURONS AND HUMAN NEURONS CAN TELL THE DIFFERENCE BETWEEN REAL SUGAR AND ARTIFICIAL SWEETENER CAUSING A HUNGER RESPONSE ! VOL. 1 NO. 40”

Unvarnished truth about… "Why So Fat." Culture, and the Body Impolitic.